You are here:
NewsPink Hill

Arriving to work on the last weekday in what could only be described as a “trying” week, employees at Southern Pharmacy’s Pink Hill location were greeted with some words of encouragement. In big, bold letters, their sidewalk path to the front door bore words that reminded them of how important they are in our battle to serve our residents while keeping everyone healthy and safe. 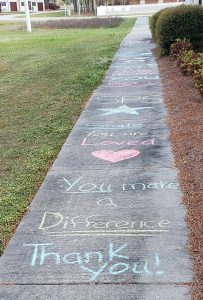 The author of the messages was Glenn Whitley, PharmD, Pink Hill’s Director of Clinical Services.

According to Glenn, the early morning artwork was “originally an idea from another Guardian pharmacy, but we thought it would be fun to do here. The reaction has been great…a mixture of laughs and appreciation from the people who have been working so hard to get medications to our residents. We’re so proud of them.”

How LTC Pharmacies Can Be a Crucial Safety Net for Assisted Living Communities
April 5, 2022
Go to Top