What’s the best way to raise money for a worthy cause? Throw a pie in your boss’ face!

As part of Kernersville’s effort to raise money for the upcoming “Walk to End Alzheimer’s,” the staff had the opportunity to vote (with their own dollars) for two of four management finalists to get pied. 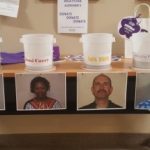 Buckets where employees voted with their cash

The top two winners (losers?) felt the love in the form of a whipped cream pie tossed firmly into their smiling faces. 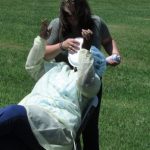 After the voting was complete and the money counted, Lakeena Frazier, the Fulfillment Supervisor and Cecil Davis, the Assistant Pharmacy Manager, were the two recipients of the flying treat.

The fun added almost $121 to the overall donation from Kernersville!

The regional fundraising event, which is part of a national effort, culminates in the actual Walk to End Alzheimer’s on October 14. 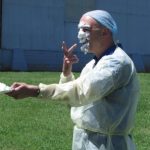 “We’re planning more fund raising events before October,” said Stephanie Jones, a member of Kernersville’s Culture Committee, the sponsoring group. “It’s a great cause and ending this disease means a lot to the people who work here.”

Save the Date for Southern Pharmacy’s 20th Anniversary Celebrations!
January 18, 2023

Substance Use Disorder in Senior Living: 5 Strategies to Empower Staff to Care for Residents at Risk
December 27, 2022